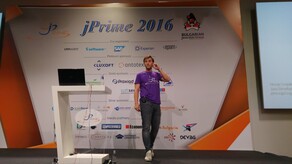 Hrvoje is a Senior Software Developer at Five, and a Lead Software Developer at several startups.Currently he's working as a senior Developer on a project for Rhapsody International, a US-based music streaming service.He entered the world of software development programming microcontrollers and FPGA circuits.After he got the handle on that, he decided to play with Java.And he's been doing that successfully for the last 7 years working on several big international projects (and some not so big).Not long ago he also started learning strange ways of front-end development, so now he's combining client-side front-end frameworks and tools with good old Java.And he can finally say he's a full-stack developer. :)In the last few years he developed an appetite for sharing his knowledge with software community which led him to speaking engagements such as this one.He's a software nomad always interested in learning new technologies and methodologies, and never completely satisfied with his or anybody else's code.